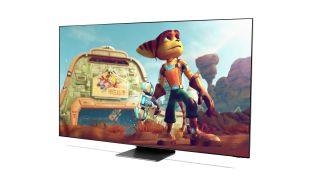 Samsung is building a cloud gaming system for its TVs – a system that could one day give Google's Stadia, Amazon's Luna, Microsoft's xCloud and Nvidia's GeForce Now a run for their money.

Samsung teased plans for its "Cloud Game Platform" during the company's recent SDC21 developer conference. The platform will let users stream games on Tizen-based smart TVs without a console.

Details are thin on the ground, but Samsung let slip that it's working with "partners" to get the service up and running. Neither Google Stadia nor Nvidia GeForce Now, two of the most popular cloud gaming platforms, are currently available on Samsung TVs. But it's interesting to note that Google is expected to begin licensing its Stadia streaming platform to "industry partners" this year.

There's even talk of Samsung teaming up with Netflix. The video streaming giant recently announced plans to "push into gaming" through the launch of two  Stranger Things titles. Gaining access to Tizen on over 200 million Samsung devices could certainly kick Netflix's gaming ambitions up a notch or two.

The cloud gaming market has exploded in the last few years as average (fixed) broadband speeds have rocketed to over 40Mbps in the US and over 50Mbps in the UK. The launch of 5G, meanwhile, has enabled speedy gaming on the go.

Just last month, Amazon unveiled Luna, a new cloud gaming service that lets you stream games straight to your phone, tablet or TV (including some in 4K at 60fps). And earlier this year, Microsoft rolled out Xbox Cloud Gaming to iPhones and iPads.

Sign up and get yourself a discount on future products!

Sign up and get yourself a discount on future products!

Credit subject to Status. Terms and Conditions apply. Digiland Limited acts as a broker and offers credit from PayPal Credit and Klarna AB (publ). Digiland Limited is authorised and regulated by the Financial Conduct Authority. Our registration number is 759575 PayPal Credit is a trading name of PayPal (Europe) S.à.r.l. et Cie, S.C.A., 22-24 Boulevard Royal L-2449, Luxembourg. Klarna Bank AB (publ) is Authorised by the Swedish Financial Services Authority (Finansinspektionen) and is subject to limited regulation by the Financial Conduct Authority. Details about the extent of our regulation by the Financial Conduct Authority are available from us on request. Finance is only available to permanent UK residents aged 18+, subject to status, terms and conditions apply. Registered office: SveavÃƒÂ¤gen 46, 111 34 Stockholm, Sweden. Corporation ID number: 556737-0431. Please note that the following product is not regulated by the FCA: Pay in 3 instalments. Please spend responsibly. Borrowing more than you can afford could seriously affect your financial status. Make sure you can afford to make your monthly repayments on time.

Let customers speak for us